The RAP Speaks — My thoughts on Colony season 3, episode 3

I have a lot of thoughts about last week’s episode of Colony on the USA Network. But I guess I better get the big stuff out of the way.

I’m sorry, I can’t call it a Click. That just sounds dumb to me.

We learned last season that humans identified some kind of signal as early as the 1970s, and it appeared that there was something visible on the Moon at that time, as well. One of the men in the room (a man with a German accent, if I remember correctly) was saying that they had to send a response. So, we’re supposed to understand that the preparation for the arrival had a much longer lead time than was apparent to the general population.

So let’s follow that scenario and see what we come up with: a few humans have this information that is not available to the general public, that a race of aliens exists and wants to connect with humans. We have to fill in the blanks as to what the aliens communicated to these humans and how humans many were in on it. Here are some of my thoughts, based on some things we’ve observed in previous episodes and what we learned from the RAP in Colony season 3 episode 3 last week:

I think I’ve come up with a real question, or maybe it’s a big plot hole. Here it is: What happened to the captive RAP’s original gauntlet?

I thought I knew the answer to this, but that theory depended on the original story we were told, that the RAP was a defector. So, it made sense that the defector RAP would abandon its gauntlet before defecting, because it wouldn’t want the other RAPs to be able to track it. Just like someone destroys or throws out their cell phone when they go into hiding or try to run away or get burned or whatever might be happening in one of these spy thriller shows or movies or books.

But this RAP was taken captive by MacGregor’s group. So what happened to it’s gauntlet?

I have a more detailed theory about these gauntlets: they serve more than one function. 1. Communication; and 2. Tracking. Remember, BB removed some part from the gauntlet before he succumbed to radiation poisoning. That part is the thing that Broussard, Morgan, Eckhard and BB used to lure a drone to the alleyway in their attempt to capture it during season 2, and it’s the same thing Broussard used on the roof of the Red Hand’s headquarters that alerted the drones to their location. We know the tracking aspect can be blocked if its put into some kind of metal container, and we see that MacGregor has his group’s RAP in a cage made out of chain-link fencing, much like Morgan, Eckhard and BB had in the loft.

So the question remains, is MacGregor’s gang smart enough to know to use a Faraday cage, or could the captured RAP’s location be tracked? Obviously, they’re using one now, but did they have the RAP in a metal cage since they captured it? Are they smart enough on their own to know to do this or did someone tell them to do it? But it seems that the Transitional Authority, at least, doesn’t know this RAP’s location, because they sure seem to want Snyder to find it for them.

At this point, I can’t come up with a scenario that makes sense. Either MacGregor is really in cahoots with the Transitional Authority, or this is a plot hole the writers overlooked.

What Does Snyder Know?

This is another question that’s bugged me since the beginning. And I’m starting to think I know the answer, at least partly. Snyder likes to make things up, and twist the truth to suit his purposes. For example, Snyder gives Nolan a document which is a plan of how the Seattle Colony dealt with its insurgency. Snyder claims the Governor General of Seattle was a friend of his. I think that’s a story; I think Helena gave Snyder the document and Snyder made up the story because Nolan would be more likely to use the plan if he didn’t know it came from Helena.

So, in the current season, 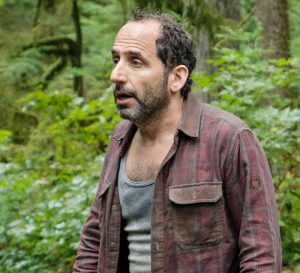 what does Snyder know?

I hope we learn more about what Snyder does and does not know. But based on how Helena calmly sat next to Snyder drinking and watching Nolan get launched into space, and didn’t tell him what she’d just learned about the imminent Total Rendition, it’s safe to assume Snyder doesn’t know everything. And also, Snyder will lead people to believe he knows more than he does when it suits his purpose.

I have several other alien questions and the beginning of some theories. First, the questions:

So based on all of this, I’m going to take a couple of leaps to make these tentative conclusions:

Here’s what I’m thinking: AI beings can’t really understand why it would be wrong to kill millions of humans and oppress an equal number of them. The RAPs, being AI, just want to preserve themselves and “win” over this other race. But if the other race is a race of flesh-and-blood, carbon-based beings, they may have more in common with us than the RAPs.

So maybe the RAPs enemies would really be better allies for us than the RAPs.

I have some questions about Amy. First we see her working in a hospital as a doctor. She is wearing the purple headband associated with The Greatest Day movement. Does that mean she was part of that movement or did she just go along with it to survive and keep up appearances? Then we see her watching the Total Rendition of the LA Bloc, so we know this happened about 6 months ago. Later we see her at her locker, seeming to make a decision about something. She picks up a necklace off the shelf in the locker and puts it on, and then tucks the end inside her shirt. To hide it? We see her helping an injured person who is presumably part of the resistance, but we don’t really know what led her to the role of “Dispatch.” She left the San Fernando bloc, the one that Broussard urged Claire and Owen to go to because it was safe. What motivated her to do that?

I found one interesting 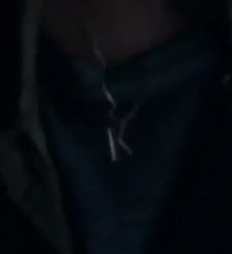 clue, but I don’t know what it means: the necklace she’s wearing when she and Broussard find that unusual structure in the middle of the night is a “K.” IMDB says her name is Amy Leonard, so there are no Ks in that name. Why a K around her neck? I’m hoping we find out more about her backstory.

I have some theories about what’s coming up. If you don’t want any spoilers, you might want to stop reading. Or maybe not. It depends on your definition of spoilers. My definition is this: if it’s revealed in the trailer or sneak peak footage put out by the show’s creators, it’s not a spoiler. If someone who saw the episode early blabs and tells you the big twist, it’s a spoiler. If I guess the big twist and write about it before the episode airs, it’s just a theory at that point, not a spoiler. So, anyway, everything that follows is stuff that has been revealed by the show’s creators, though I did pause stuff to make sure. The rest of it is just guesswork on my part. Here’s what I think is coming soon, either episode 4 or 5: