Good night, John Boy — is this the End for the Dalton Family? 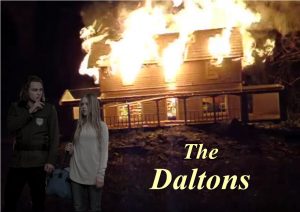 Except for Gracie, all of the Bowmans went by different names in Seattle. This isn’t the first time they’ve used assumed identities, but it’s the first time since the show started that we’ve seen them living for an extensive time under a different name. We also see them all reversing their roles from previous seasons:

How did our characters get here?

Is it believable that they could utterly reverse like this? Here are some thoughts to consider, in somewhat random order:

But here is what I think is the big key to this: their choices, and how they led to Charlie’s death and how, in the second half of the season, they’ve all been thinking “if only we hadn’t . . .” and their actions going forward from there were reactions to that thought process.

Katie realized, even at the end of season 1, how her actions were having a negative effect on her family. But she just can’t help it — her basic nature is to want to help people. So the job at the SRMA is the perfect thing for her to jump into with both feet, put her head down and worry about other people’s issues while avoiding thinking about her own.

You notice they don’t just keep her stuck at a desk, they have her going to the camp and supervising groups of refugees being placed. She seems to have an important role even though she’s only been there 6 months. You’ll also notice the Dalton house is much more sterile-looking then the Bowman’s home in LA was. Even though we know the “Sullivans” were only living in the house with the orange trees in the backyard since after the Arrival, either it was already a very comfortable home, or Katie made it so with lots of personal touches. You get a sense of her decorating style when you see the interior of the Yonk, which we know she was in charge of decorating. So did our Katie adopt a minimalist decorating style when they arrived in Seattle, or is she just not making an effort?

Katie made some reckless choices in season 1, and it came very near to having serious consequences for her and her family. There was clear danger of all of them being sent to the Factory, but instead, they got Charlie back, Bram got sent home early from the labor camp, and they all made it out of the LA bloc in advance of the Rendition. Then they made another series of choices that brought them to MacGregor’s camp, which led to Charlie’s death. After she’s been in Seattle for 6 months, she learns Broussard escaped LA and is in Seattle, and she knows nothing of the risks he was involved in along the way. It would be easy for her to think, if we’d stayed in LA we’d all be safe, including Charlie.

When Bram visits the placement office to see about getting a job with the Community Patrol, the counselor mentions he’s had 3 job placements since “Sean Dalton” arrived in Seattle. We saw him driving a grocery delivery vehicle, but he must have had 2 other placements before that, and he did well in all of them, according to the counselor. He’s found a group of friends and met a girl. And he’s taking a very protective interest in Gracie.

As the mother of 2 boys who are just a couple years older than Bram, I can tell you that 19 year old boys want to be independent. A boy Bram’s age would want his own place so he could come and go as he pleased and have friends over, and likely to have more freedom to spend time with his girlfriend without parental knowledge or interference. Bram already seems to come and go as he wants, just using his job as an excuse, which no one seems to question. The thing that’s unusual about Bram is that he wants to be responsible for Gracie more than he wants his own freedom. That is very unusual in a young man of his age.

He sees his parents are involved in their jobs or other pursuits and are not there to help Gracie with her homework or even able to make her breakfast. The one time Will makes breakfast for the family, no one eats it because they’re so used to getting their own breakfast they are not expecting it. Bram isn’t interested, and distracts Will long enough that the bacon burns and then walks out, and Katie points out that Will made a mess.

Bram picks up the slack with Gracie, first by just doing the normal parental tasks like making sure she’s fed and helping with homework, and later he’s realizing that Katie and Will are doing dangerous things again and he’s looking for another place for both of them to go where they will be safe. I think he feels like his parents’ choices led to Charlie’s death, and he figures they brought the danger on themselves, but he wants to do what he can to keep it from spilling over and affecting the kids.

The behavior of Will Bowman is the thing fans are both most dismayed by and find most confusing. And it does seem, in some ways, an unrealistic reversal, but I think I can make some sense of it. Will, as the father and husband, feels the weight of responsibility for the whole family and the consequences of his choices for all of them. Let’s consider a list of these choices:

The bottom line is this: Will can’t forgive himself for making choices that he believes led to the death of his son, and he’s so consumed by that that he can’t remember he still has a wife and 2 other kids who need him. Fans have questioned if this is realistic, and likened it to people in our world who lose a child and how it affects their marriage. And I think the difference is that Will is not just feeling grief but guilt. The guilt is what is eating him up.

The show creators have said they used the concept of how an addict would behave in figuring out how Will would behave this season. I’m not clear what he’s supposed to be addicted to — violent behavior, perhaps? — but that’s where the neglect of the family and the compulsive investigating and the senselessly putting himself in harm’s way comes from.

What’s Next for The Daltons?

I’m still hoping Netflix or Amazon will consider picking up Colony. I’ve even thought maybe it would be a good fit for HBO. But assuming that doesn’t happen, I’m going to talk briefly about what it looks like they are each headed based on what we know from watching the show and what the creators of the show have said.

First, if you haven’t already, I urge you to listen to the Talk Colony Podcast where they interview Tim Southam. He said several things that I doubt were completely apparent just from watching the show:

So here’s some of my thoughts about what could happen next, in a very high-level, big picture way:

It may have looked like Katie was about to be blown up at the end of season 3. She was outside the wall and some kind of battle was happening. Seattle was shielded but presumably the area outside the walls was unsafe. So what happened to Katie?

I don’t pretend to know the answer, but I also know Katie can take care of herself, so she probably found a place that was safe from the attack. We know she was in position of the Barnes’ family’s address, so I feel like she’ll head there as soon as she is able.

I envision her hiding out in Amy’s house until she’s able to convince Bram and Gracie that she’s not a danger to them, or until they realize that collaboration will not save them.

We know they are safe for now. I feel like Sal is not a bad guy. He feels the best way to keep his family safe is to go along with the collaborators. He’s smart enough to know to check out Katie, so he may know more than he let on about the Daltons and their true identity. It’s hard to know how he would get such information, but it’s possible he knows more. He’s willing to give Bram a chance, but he’s clear he wants Bram to go along with the IGA and not ruffle any feathers. I think that’s what Bram wants to do, at least for the short term. He was trying to get Gracie into a better school so she’d have a good future career, so he’s not thinking alien-battle-apocalypse is in the near future.

It’s hard to envision how Will can survive after being put into a pod. But we have to consider a couple of things:

The battle has begun. We don’t know how it will end. Will one race of aliens destroy the other? Will one race win and the other retreat and leave our solar system? The RAPs seem to have convinced the human collaborators that the Earth will be destroyed in the battle, but we don’t know if we can trust them to tell the truth.

We do know that everyone at the main headquarters of the IGA has been killed. Kynes envisioned Seattle surviving the battle between the 2 alien races and then the aliens would leave, and he and his Outlier army would fight against the IGA for control of Earth. We don’t know how big the IGA is or how loyal the lower-level minions will be to the cause once they realize the elite leaders are gone.

Snyder is in charge of Seattle, but we don’t know what he plans, exactly, either. He did seem to be questioning if the IGA was backing the right race of aliens. If Earth survives the battle and all of the aliens are not gone in the aftermath, Snyder might try to play both sides in an effort to save himself and Garland, at least. Who else will he try to save? Will he finally be able to save the Bowmans and make up for Charlie’s death?

I really have no idea where this could all go. I am merely sharing what I’ve shared here to show my fellow Colonists that there’s hope. All is not lost. The Bowmans are not dead. The resistance will continue.