I’ve been thinking about the Season 3 finale of Better Call Saul for a week now, and I’ve finally gotten past my emotions at what happened in the episode entitled Lantern, and I’ve started to muse about what the fallout will be for our characters in Season 4. Therefore, predictions and thoughts about Season 4 will take up the bulk of this post, but I have to get a few things off my chest about the events of this episode first.

Here are a few random thoughts and then a longer rambling about the very last scene:

My thoughts on Chuck’s mental illness and apparent death

I just re-watched Lantern last night and I still don’t feel like I agree with the overwhelming opinion I’m reading on the Internet that Chuck deliberately killed himself. I felt like Chuck is portrayed as a man in a semi-catatonic state who accidentally caused his own death. Remember, we’ve seen him lose consciousness more than once and even be in what appeared to be a coma due to this illness. I am not familiar with mental illness manifesting itself in that way, but he sure didn’t look like he was intending to knock the lantern over, to me.

If he intended to kill himself, I can think of a few easier and less painful ways than setting the house on fire. I wonder if his pill bottles would contain enough medication for an overdose? Or what about hanging himself? I suppose electrocution was out of the question? The almost catatonic expression on Chuck’s face makes it hard to believe that kicking the lantern over was purposeful, though it does explain why Chuck didn’t run out of the house when the flames started to spread.

I finally concluded that the show’s creators recognized that this would be a hard scene to watch for people who have had a family member who took their own life, or for people who have attempted suicide and survived, and that’s what led them to choose this rather unusual scenario.

But I guess I still have a few questions about his illness, which may never be answered:

What’s next in Season 4?

This brings me to the main point of this post, my thoughts about what will happen in Season 4. We have a lot of ideas, based on what we know about the character of Saul Goodman in Breaking Bad, and the situations surrounding the characters of Gus, Mike and Hector. But we have some time before we get to the Breaking Bad timeline, and we’ve got a ways to go for that yet. But I’m wondering a few things, based on what happened in Episode 10:

I have one more thought about a skill I see in both Jimmy and Saul: his ability to read people and find the solution to their problem. Sometimes it’s a problem they haven’t yet realized they have. Examples:

The Adventures of Mabel 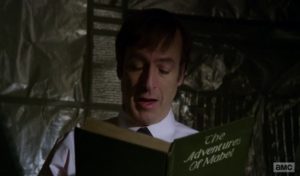 I love books and I love that older brother Chuck read aloud to Jimmy even when Jimmy was approaching or had reached the age at which he could read himself. Reading and being read to have produced fond memories in my life, both of my own childhood and that of my kids.

So, in honor of parents and older siblings that read aloud to their children and younger siblings, I wanted to close with some information about The Adventures of Mabel, the book we first see in the first episode of the season, entitled Mabel. I thought it was so fitting that the last episode shows a flashback to Chuck reading this book to Jimmy. I’m sure this book has become an instant collector’s item after being mentioned on this show — I found online prices of hardcover editions approaching $40. But it’s passed out of copyright into the public domain, so you can read a digital edition for free if you want. They have versions for pretty much all of the ebook readers out there. Enjoy!

Tell me what you think

Please comment below and tell me what you think about my theories or what you think will happen in Season 4, which I hear has finally been officially announced.