It’s been a very busy week, so I’m going to try and make this quick. But I have some really interesting details you may have overlooked, and some maybe-not-so-wild speculation, so here we go.

What About the Other Two Armories? 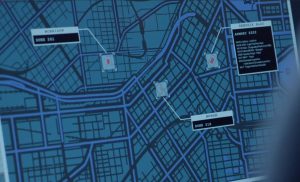 I’ve gathered some very interesting information. Some of this is from notes I’ve taken while watching previous episodes. And the titles of the next two episodes of Colony have been released on the Internet. And I zoomed in on the computer screen Harris and Kynes were looking at in the opening scene from two weeks ago (see image).

What’s Happening in the Cold Open?

At the beginning of episode 11, we see at least 3 Outliers in a forest. We don’t know where this is, but here’s a clue you may have missed (I found this out by putting on the closed captions): The female Outlier, 35098, was speaking Persian. The male Outlier, 59640, was speaking Mandarin. So they had to do hand motions since they couldn’t understand each other. But they didn’t try other languages, so it’s safe to say they each only spoke the one language, and most likely weren’t Americans. Wikipedia says that Persian is also known as Farsi and is spoken in Iran, Afghanistan and Tajikistan. Mandarin, of course, is spoken in China, and Wikipedia tells me that one of the regions where it’s spoken is pretty much adjacent to Tajikistan. So it’s likely this forest is in Asia. Although we don’t know, maybe they relocate the Outliers far from where they were captured.

I’m wondering why the RAPs haven’t made suits for the Outliers with that bulletproof material that Broussard and Amy have a sample of. Seems like that might be the way to keep the aliens from killing them . . .

It’s hard to say what Snyder was hoping would happen. He said, “We make our own reckless move and then see how he counters.” So he framed Harris for the bombing and Kynes knew immediately that it was a frame-up. And then the question is, did Snyder anticipate what Kynes would do? Did he think Kynes would disappear and Snyder would be put in his place as Proxy?

He knows Kynes was not sending all of the Outliers into the pod storage area, but does Snyder know Kynes was gathering them for his own plans? “I play all sides, Helena. That’s my gift.” I can’t wait to see what happens this week.

More Questions about the Outliers

I’m thinking about the Outliers. We know they were gathered into pods and launched into space from the labor camp. So where did they go? Were they stored on the Moon? Were they destroyed in the Factory, or were they elsewhere? Snyder tells us “they used to be sent into space, but now they’re stored beneath the launch platform.” So what changed? The destruction of the Factory is the logical thing that has changed.

The Mystery of Amy

I was fascinated by the conversation between Amy and Katie. A couple of random thoughts:

But here’s what I really want to talk about: Katie asks Amy if she has family. She looks down but then says no. Clearly the “no” is the current answer, she has no family in Seattle, but there’s more to that story. I hope we learn more, we only have 2 episodes left. Amy tells Katie “I was in LA for a medical conference” when the arrival happened. Here are my thoughts on that:

The Mystery of Meadow’s Family

Sal says he and his wife were talking about how they want “Sean” and Gracie to come over for dinner again. Who is Sal’s wife? I can only think of 4 women we’ve met since the “Daltons” came to Seattle:

Maybe it’s no one we know. Just some normal woman. I just feel like these scenes with Meadow and her family have to be going somewhere. Or maybe it’s just Bram wanting a normal life. Only two episodes left to find out.

I have a couple of random thoughts that don’t fit anywhere else: